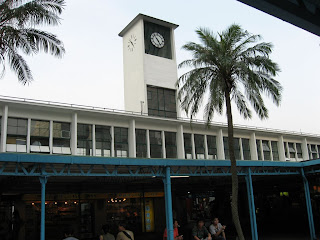 I wonder why none of the local newspapers published the following headline on their front pages last Sunday:

If I were still a journalist, I would have submitted the following to my editor:

"The Star Ferry pier located to the opposite of the City Hall was murdered in front of dozens of witnesses on Saturday, 16 December 2006. It died at the age of 49.

"Unlike many other murder cases in Hong Kong and other parts of the world, the murder of the old Star Ferry pier was carried out in public. More importantly, there was more than one murderer.

"This means that the Star Ferry pier was actually murdered by both the Government and the ignorant members of the legislature.

"Unfortunately few people seem to recognise this cruel fact. The populist opportunists joined the protesters at the last moment in an obvious but disgusting attempt to exploit boiling resentment towards the administration for their own benefit.

"Despite widespread public opposition, the Government did not back down. With on-the-record support and approval of the Legislative Council and the Central and Western District Council a few years ago, the Government wasted no time to demonstrate its strong governance by ignoring the roaring anger of the public.

"What remains a mystery is the District Council's discussions and decision. A source recalled that the members only agreed in principle that the expressway should be built and they were not informed of the Government's plan to demolish the old Star Ferry pier.

"The brutal dismemberment of the old Star Ferry pier took place last Saturday. In less than 24 hours, which sets a new record of remarkable efficiency of the administration, the pier and the clock tower were torn down and shipped to the Tuen Mun landfill site. The clock tower was ruthlessly hammered into unrecognisable pieces that were mingled with other rubbish, mud and sand. The process took no more than 30 minutes.

"Everything was gone without a trace - so as the people's confidence and the future of Hong Kong."

Don't throw at me the rules of journalism. This is not meant to be a factual report of what happened.

How could someone who grew up in one of the oldest areas of Hong Kong possibly write something cool-headed when one of the icons of her life was violently destroyed?

The demolition was clearly a well-planned and seamlessly executed operation that was designed to remove any tangible evidence out of sight in the quickest possible way. The Government masterminds must have thought that when things go out of sight, they soon go out of people's minds too.

Let the outrageous and heartless remarks of Mrs Rita Lau, Permanent Secretary for Planning, Housing and Lands, at the Legislative Council on 18 December speak for the Government:

"Let me tell the truth, even if you may call it a cruel one: My understanding is that the clock tower has been sent to the waste landfill and mixed with other construction waste. It can't be restored anymore. Don't have any rosy dream that it may be restored."

I must admit that the administration has done an excellent job this time to treat the unwanted waste of the old Star Ferry pier and the clock tower, in an obvious attempt to defuse the issue as soon as possible. People would have been dumped in frustration and helplessness. But Mrs Lau's provocative statement has unfortunately reversed the situation. Believe it or not, the public debate and uproar and political pressure on the Government will certainly drag on to the benefit of nobody.

In my opinion, the destruction of the old Star Ferry pier is yet another example of the ignorance and complacence of the rich and powerful baby boomers in Hong Kong. They don't recognise the value of anything but money and power. Money comes from land sale and power is represented by the heartless, cold and inhumane glass-walled castles scattered around the strategic points of Hong Kong. Everything standing in the way to money and power should be ruthlessly removed.

Perhaps the obsession with money and power is what Taiwanese writer Lung Ying-tai refers to as the "Central value" that is made to dominate and represent the "Hong Kong value":

"This is the Hong Kong that the international community sees and Hong Kong people are happy to present: Intimidating architecture, glamorous shops, middle-class in snow-white collars and speaking fluent English are commuting hurriedly between commercial buildings in Central. In other words, Central represents Hong Kong. The 'Central value' dominates and represents the value of Hong Kong: the pursuit of personal wealth and the worship of commercial competition in accordance with capitalist operating logic. 'Economy', 'getting rich', 'efficiency', 'development' and 'globalisation' are used as indices of social progress."

Unfortunately, these dumb guys who often believe that they are the smartest elite in Hong Kong fail to keep up with the fast-moving changes as a result of their much-touted and worshipped globalisation. They think their old tricks would continue to make them and their next generation succeed in the brave new world. But they fail to realise that so much has changed and that their old tricks have already lost their edge. Now we can see that they have been making every possible effort to maintain Hong Kong as it is two or three decades ago, so that their old tricks would continue to make sense.

And this was precisely the beginning of the demise of Hong Kong.